The Yorkshire terrier from Marina da Gama gave his family a unique situation to tackle this week.

Cheryl Cost says her teenagers are avid fishermen and that Rebekah had noticed the family dog, Teddy, sitting a bit strangely, with some shiny threat visible, from his muzzle.

Rebekah quickly realised that Teddy had helped himself to something from her fishing tackle, and the family rushed their pet to the vet.

However, Covid-19 related business losses meant that the distraught family could not afford the life-saving operation Teddy needed, so their local vet referred them to the Animal Welfare Society (AWS) of South Africa.

Allan Perrin of AWS said Teddy was lucky to be alive after swallowing a razor-sharp fish hook attached to a metal swivel; and approximately 300mm of fishing line.

A fresh set of X-rays taken at AWS showed that the fishing tackle had travelled all the way down into Teddy’s stomach. It was decided that the operation could not be delayed for fear of the hook becoming lodged in his abdomen, or nylon becoming tangled in his gut.

Teddy was a little trooper even though he was on the operating table for quite some time as the team carefully extracted first the hook, then the line and finally the swivel before stitching him back up.

Dr Zhaneta Stoynova performed the operation and Oscar Mdudu, the hospital assistant who was responsible for Teddy’s post-operative care, are delighted with the operation’s success.

Mr Mdudu describes Teddy as one of the most “chatty” patients he has ever had the pleasure of treating. According to him, Teddy barked non-stop to attract his attention and loved being taken out of the enclosure for cuddles.

“Earlier today we had the pleasure of handing a fit and healthy Teddy over to his owner who was reminded of the dangers of leaving fishing tackle lying around,” Mr Perrins said.

Ms Cost said she wanted other people to learn from their experience and be aware of the dangers of fishing tackle, not just to pets, but also to wild birds and animals.

She said had it not been for the part of the fishing line which Rebekah saw, they would never have known he had swallowed it.

“This whole ordeal has been so stressful; we are just so grateful to have him home safe and well again,” Ms Cost said. 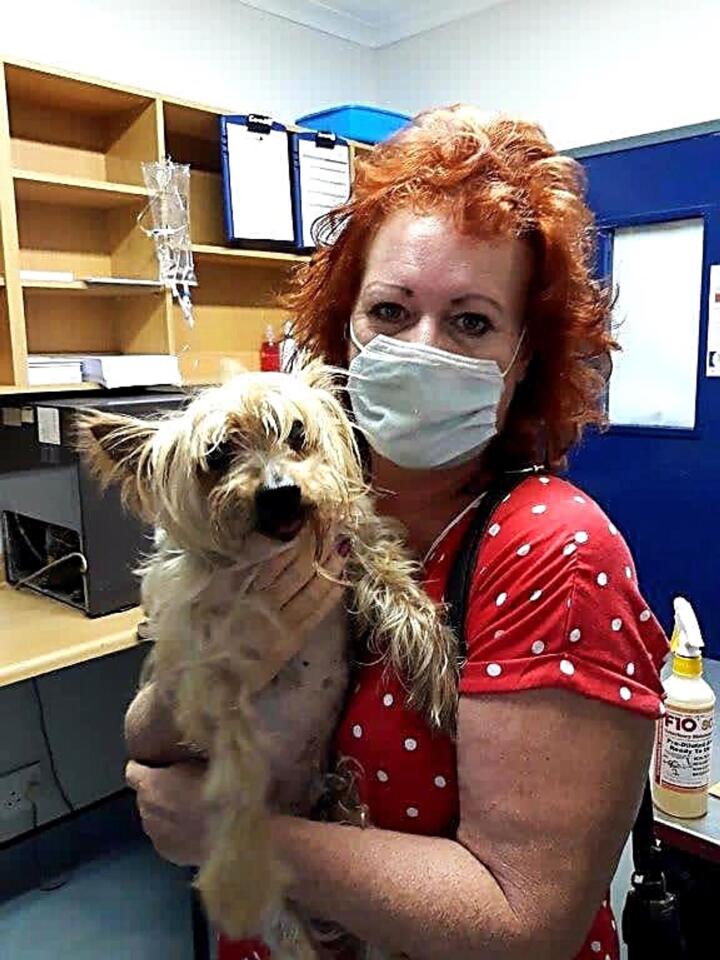 1/2: Cheryl Cost of Marina da Gama with Teddy her terrier who swallowed fishing tackle and was saved by Animal Welfare Society of South Africa.